It's been a while since my last post but I've genuinely been so busy and time is really just flying away in Germany!
Christmas was an absolute blast with my host parents and siblings who came to visit from Munich and Berlin. Everyone was truly lovely and it was so nice to experience a typical German Christmas and compare it to my family's Christmas in New Zealand. Unlike New Zealand, there are 3 days of Christmas celebration in Germany so the fun continued for an extended period of time! We did a lot during these 3 days including playing board games with my host siblings, opening presents, spending time together and arguably the most important- eating A LOT of great food!
For New Years my host parents took me to Hamburg to experience Sylvester (German new years eve) there. It's a beautiful city with great views and plenty of places to visit and shop at. We spent most of our time walking around and exploring the city in the bitter winter cold and when the clock struck midnight we enjoyed some coffee and hot chocolate whilst looking at the fireworks that went on for a good half an hour!
After the school holidays, I had to adjust to daily life in Germany which includes waking up early, going to school, doing my homework etc. There have been times where I've been incredibly homesick and yearning for the familiarity of New Zealand but a good chat with my family back home actually made me feel a lot better. My friends at school have been so welcoming and caring and I hang out with them quite frequently. So far I've baked Christmas cookies with my friends, I've gone to the cinemas and gone shopping, went to a few holiday parties and I even visited the city of köln on a day trip where we went to the Christmas market and did some touristy stuff there!
I got the opportunity to visit my uncle in Witten which is a small town near Dusseldorf so I am grateful I got to see my family here in Germany.
My host family is so lovely and they really try to make me feel at home. There have been some cultural differences but I take that as an opportunity to grow and learn more about German culture.
One of my favourite things so far is to experience the cold and snow of Germany. I haven't been around snow that much in my life so I feel like a little kid seeing this cool new thing for the first time!
Posted by Unknown at 10:58 No comments: 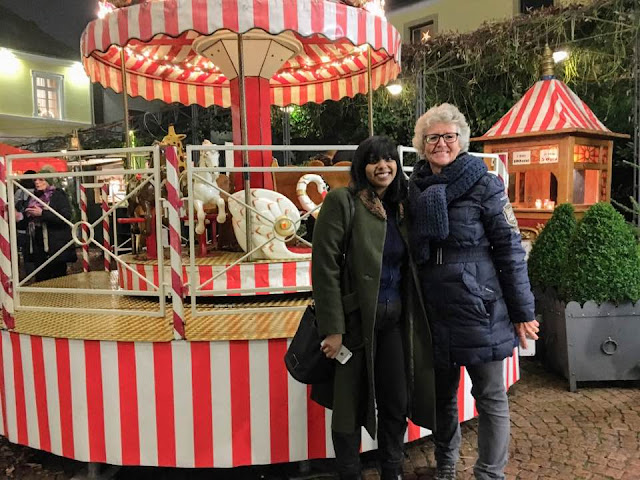 At the Christmas Market in front of the carousels with my host mother Betty. 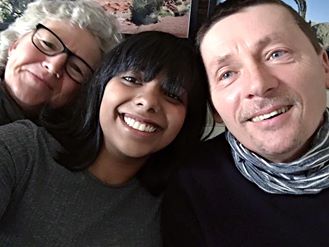 With my host parents, Betty and Andy .
Posted by Unknown at 19:48 No comments:

After 3 exhaustive flights and nearly 30 hours of travel I have finally made it to Bad Iburg Germany! A small town with a population of approximately 10,000. I arrived quite late at night and very tired but nevertheless, my excitement spurred whatever vigour I had in me and I came out of the arrivals door with a big smile ready to greet my host family and begin my adventure in Deutschland!

Even though it was night time, the town was lit up with a profusion of Christmas lights around the houses. The place I live is incredibly beautiful, surrounded by tall trees and quaint houses, which makes me feel like i'm in some sort of german fairytale. The historical town of Bad Iburg is also very lovely. Simple things like walking around the streets, meeting new people, hearing a completely different language being spoken around me is something i've really come to value in my experience so far. It can be a bit isolating not knowing what people around are saying but i'm slowly getting used to it and as I learn more German hopefully i'll be able to follow at least some, of what I hear.
Last night my host family took me to a small Christmas market in town, which is something i've only seen in films so it was a new experience I thoroughly enjoyed.

I also started school this week. Not going to lie, I was really nervous as I have minimum knowledge of German and I didn't know how people were going to react to me but as it turned out I had nothing to be worried about, and i've already made a lot of new friends who are immensely interested in New Zealand. School has been quite hard in terms of understanding what the teacher is saying but I don't need to do the school work here, or acquire any credits, so my goal is to simply learn more German and converse in the next 3 months! It's very different from my school in New Zealand, which I find really interesting so i'm constantly asking questions about everything. For example, they have 20 minutes break after every class and they don't use technology like laptops or phones. One piece of advice given to me was to simply put myself out there as much as possible especially in school. Talk to new people, converse and learn as much as possible. I think because of my natural curiosity I didn't struggle with this and i'm not scared to go up to people and talk but I really do suggest any exchange student to do this or else you will definitely regret it!

So this has been my life thus far, my host family are so lovely and i'm really grateful for them. My host dad's english is comparable to that of my german ability so on afternoons after school we both sit in the living room and learn english and german respectively!
Christmas and the new year is approaching very soon, which i'm really excited about! I can't wait for Andreas and Elizabeth's family to come and celebrate with us, I think a German christmas will be very, very fun and different from a New Zealand Christmas! I've always wanted to have a white christmas so  hopefully it will snow!
As far as the new years, we are going to spend it in Hamburg, which i'm really excited about. In complete honesty, this year has been an absolute rollercoaster for me but I can't think of a better place to welcome the new year than where I am right now...

Alisha x
Posted by Unknown at 19:42 No comments:

With only a few days left before I embark on my journey to Germany, the pre departure excitement (and nerves) is really starting to hit me. My burning anticipation is at an all time high and no matter how much I try and picture my upcoming ventures I still have no idea what to expect- funnily enough this doesn't scare me...Just makes me more curious and excited...

It feels like i've come along way since I first discovered the NZIIU website and applied for this scholarship. It started off as a thrilling thought in my head and suddenly around August of this year it became my reality. Thinking about this made me realise how fleeting time truly is. The exact reason it's important to grasp at these kinds of opportunities whilst you're young and still learning about the world.

One of the hardest challenges for me while i'm away will probably be living away from my family for such a long period of time. I've always been incredibly independent but always had the support of my family for me to lean on if I ran into trouble. However, I believe this exchange will be really good for me and will provide me with that extra bit of confidence in myself and in my ability to get things done on my own.

I've been in contact with my host family a couple of months before departure through Facebook and 'Whatsapp' so I could get to know them and familiarise myself with their lives so i'm not completely thrown in the deep end! I'm very lucky because they're incredibly lovely people and they get along with my family, which was really important for me.
I like to be pretty organised so we bought gifts and souvenirs from NZ well in advance for my host family. It was a little hard deciding what they would like but after getting to know them a bit I believe we chose wisely!

School was very hectic right up to the last day so I hadn't had too much time to practise my German so I think that's something that will pose a challenge for me right of the bat, however I should adjust in a few weeks after being surrounded by the language...Hopefully!

Here is a picture from my farewell dinner I had with my friends in the city a few days ago. We went to one of my favourite restaurants, which i'll dearly miss while i'm away :) 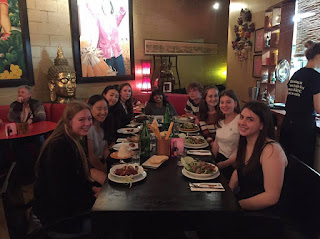 I don't think it will properly hit me yet until i'm on the airplane 40,000 feet up in the air that i'm really going to be away from home for 3 months but if anything i'm so appreciative that I have this incredible opportunity to travel across the world and experience such a beautiful country like Germany- not only as a student but as a writer, a photographer and as an aspiring journalist where I can get first hand experience in this country as opposed to reading it in a book or seeing it through a computer screen...

As the Germans say Aller Anfang ist schwerz!
(all beginnings are hard)

Alisha x
Posted by Unknown at 22:37 No comments: